We Will Rock You Interview with Queen & Ben Elton

What better way to follow the worldwide box office movie success of ‘Bohemian Rhapsody’ than with the 2019/20 UK & Ireland tour of the smash hit Queen and Ben Elton musical ‘We Will Rock You’ which comes to the Millennium Forum from Monday 21st – Saturday 26th October.

Queen fans and lovers of musical theatre alike are advised not to miss this production, which promises to deliver the rock, spirit and spectacle of one of the world’s best-selling bands, Queen. Given the immense success of previous productions, this year’s ‘We Will Rock You’ tour is sure to be another runaway success.

Since 2002, over 15 million theatregoers in 17 countries have been thrilled by this epic show. Having enjoyed an incredibly impressive run of 12 years at London’s Dominion Theatre, followed by many triumphant tours and the 10th anniversary world arena tour in 2013, ‘We Will Rock You’ will dazzle audiences at multiple venues across the UK & Ireland on a 10-month tour, beginning at Ipswich Regent Theatre on 23 September 2019.

‘We Will Rock You’ is set in a distant, dystopian future where Earth is called Planet Mall and its inhabitants wear the same clothes, think the same thoughts and exist in a brain-dead haze. This system forbids musical instruments and composers, whilst rock music is all but unknown. The musical tells the story of Galileo, Scaramouche, Killer Queen and the other ‘Bohemians’. Join them on their journey to discover the Holy Grail of Rock and restore the free exchange of thought, fashion and most importantly, live music.

Speaking about the process he underwent to write the show’s script, Ben Elton, one of Britain’s most successful writers, says it became clear to him that the story had to comprise an abstract quality “that reflected the feel of the word and music, rather than its literal content”. He elaborates that, “This was not pop music, but rock music. Some of the most famous rock ever written, and legendary music should have a legendary context. I began to think of legends, both new and old, from King Arthur to The Terminator; heroic myths in which brave individuals take on the vast monolithic force of evil systems.”

The musical’s narrative is certainly bold and its success is therefore unsurprising. If previous reviews are anything to go by, then this tour promises to be a must-see: The Daily Telegraph observed that, “There was wild applause at the climax of the show… and it only got louder”. The Financial Times commented that, “The sheer power of the best Queen numbers strikes hard”, while the Daily Express was short and sweet in its assessment of the production, branding it simply “Spectacular”.

Equally as impressive as the show created from their musical canon are Queen legends themselves, Brian May and Roger Taylor, who had early reservations about staging a musical.

“We were not initially convinced, not being fans of the ‘Musical Theatre’ genre on the whole,” says Brian. “The show needed to work in a theatrical context and retain the rock, whilst also incorporating the spectacle, uniqueness and humour embodied by Queen.”

This was certainly an important aspect to include for Roger, who affirmed that, “We (Queen) took the music seriously, but we never took ourselves seriously. We always had the ability to laugh at ourselves. Some of the stage gear and even some of the music is quite humorous. The whole middle section of Bohemian Rhapsody was – we did a lot of daft things and a lot of experimentation.” It was therefore important to do something new. Brian continues, “If we were going to go into this arena, the challenge was that we would somehow try and make it our own.”

Fortunately, this challenge was both accepted and triumphantly overcome. Brian remembers that, “there was a point where I realised there was a whole new area of creativity opening up to us if we wanted it – a whole new canvas to paint on”. And ‘We Will Rock You’ is certainly creative with a book written by Ben Elton, whom Roger describes as having “such a great active mind that never ever stops churning out ideas”. The show is fun, light and humorous, yet also contains those softer and, at times, heart-rending moments, which allow an audience to emotionally invest. Ben describes it as “intriguing, challenging, achingly romantic, brutally cynical and at once both sad and hilarious”.

‘We Will Rock You’ undoubtedly blends all of these elements and, as Ben intended it to be received, Roger describes the show as “silly, but funny and making quite a lot of serious points while it goes on its rather daft course”. Echoing Brian’s determination to create something “new in every sense”, he goes on to reflect that the intention was “to keep it a bit gritty and make sure it’s not a typical show”. If you haven’t seen the show before, then you’ll soon find out that they completed this task with flying colours.

Thematically, ‘We Will Rock You’ couldn’t seem more relevant today: set in a world where individuality is no longer valued and being performed on a stage which is “breathtaking in terms of equipment” and “totally cutting edge technically”, the show arguably speaks to a modern audience more than ever.

With today’s focus on technological advancement, reading and the marriage of minds seem to have become out-dated activities and Brian recognises the musical’s significance today. “I think it’s a very good comment on the way things are going. Ben’s idea that individuality is being eroded every second of the day and soon it will be impossible for people to write their own music, think their own thoughts, write their own poetry is very perceptive.” To Brian, ‘Radio Ga Ga’ “represents the malady which is taking over the world. It’s almost like that old ‘men versus machines’ thing, which we also addressed a few albums ago.”

Just as ‘We Will Rock You’ explores themes relevant to those growing up in today’s world, the tour offers younger generations, who may not have heard this music before, the opportunity to discover the iconic musical genius that is Queen. Brian comments, “I had this very strange thought that it’s quite possible that this particular musical might be the thing through which people know our music in 300 years’ time.”

Speaking about the band’s relevance today he goes on to say that, “I’m quite shocked at how fresh this stuff still sounds and it makes me very happy, obviously”. Queen’s back catalogue is clearly standing the test of time, and this new tour of ‘We Will Rock You’ is sure to be a stand out spectacle which will offer fantastic performances and incredible production value.

Taking on the role of Galileo is Olivier Award nominee Ian McIntosh (Beautiful – The Carole King Musical / The Commitments), who will be joined by Elena Skye (Les Misérables / Kinky Boots) in the role of Scaramouche. Playing Killer Queen is Jenny O’Leary (Heathers The Musical / Rent), with Michael McKell (Macbeth / Blood Brothers) as Buddy. Adam Strong (Jesus Christ Superstar / Rock of Ages) will take on the role of Khashoggi, with David-Michael Johnson (We Will Rock You, Germany / Jesus Christ Superstar) reprising the role of Brit and Amy Di Bartolomeo (Bat Out of Hell / Priscilla Queen of the Desert) playing Oz.

Brian describes the new tour as “a stunning state-of-the art new-look production – but of course the original story is now more relevant than ever. We’re confident ‘We Will Rock You’ fans will love revisiting the world’s first true Rock Theatrical, and a whole new generation will now discover the VIBE!”

‘The Show Must Go On’ and this is one not to be missed! 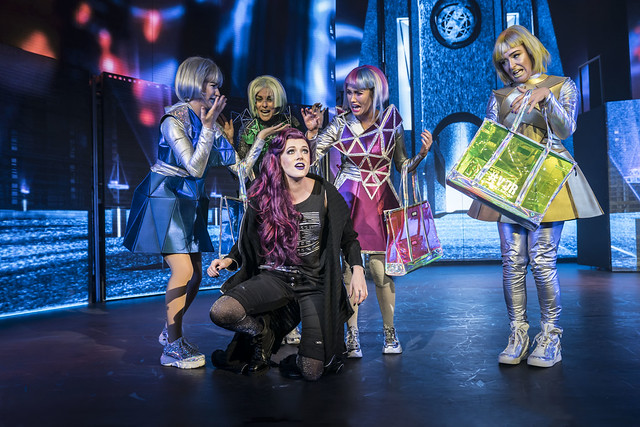 Stay in touch with us...

We want to share our good news stories with you. From exciting show announcements to special offers or discounts for major productions you can be first in the know. We value your privacy and support and by signing up to our mailing list you can expect to receive:

The Millennium Forum trading as Derry Theatre Trust is accepted as a charity by the Inland Revenue under reference XR16635. A registered NI Company No. NI 031527.